Best practices in supporting physicians and the community
Thursday, May 14, 2020 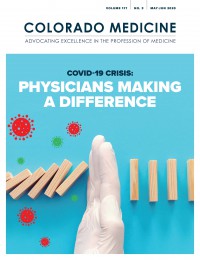 It’s rare as medical societies to get involved in direct patient care, but we’re a rare breed in Colorado Springs. Our city was founded by people who saw opportunity in the unmined rock in the mountains. Our organization, the El Paso County Medical Society, was founded in 1879 to support physicians who saw an opportunity to improve the treatment of consumption. And in the anthrax attacks that followed 9/11, we saw another opportunity. Physicians and their care teams would integrate during natural disasters to support their local community.

It started as DR HELP, and in 2003 it would become the Medical Reserve Corps of El Paso County (MRC) after joining with the national network of MRC’s operated under the U.S. Department of Homeland Security. Most MRCs are operated by local health departments. We, on the other hand, are one of only four medical societies in the country that operate a medical reserve corps. In our case, it’s a program run by the EPCMS Foundation.

COVID threw us for a curve

There’s something about 5 a.m. on a Saturday that says, “drop what you’re doing, we’re mobilizing!” And like both other times we mobilized – 2012’s Waldo Canyon Fire and 2013’s Black Forest Fire – the call came early on a Saturday morning. Almost literally, no one had prepared for this, ourselves included.

In fact, only one group had envisioned this. Collectively, the Bill and Melinda Gates Foundation, Johns Hopkins University Bloomberg School of Public Health – Center for Global Health Security, and the World Economic Forum had prepared with an Oct. 18, 2019 tabletop exercise anticipating a global pandemic. In that exercise, a novel coronavirus, similar to the 2003 SARS coronavirus, jumped from bats to humans and spread worldwide over 18 months. Sixty-five million perished before a vaccine could be created.

We all had a role in preventing this outcome.

In prior mobilizations, we operated with two individuals alternating shifts. In this case, we needed eight people focused on the mobilization every day, so we added functional roles for clinical operations, administrative support and media relations – all of which were needed immediately. In fact, MRC was on local TV, radio and in the newspaper within 72 hours of mobilizing.

Fortunately, too, both EPCMS and MRC are fully integrated components of our community’s emergency response plan, and are specifically referenced in the documents. The plan was in place, and with a larger management team we were ready.

What does the future hold?

As of this writing, our credentialed volunteer count has grown to 212 and we’ve already contributed 523 hours of support, a number we expect to grow as we prepare for the “long slog” over the summer. Our personnel are embedded in many of the long term care facilities in our area, staffing the county’s 24-hour telehealth call line, and with plans to support Teller and Pueblo Counties if needed.

This all comes on top of our regular EPCMS activities supporting physicians and their medical practices. Along with PracticeBeat, a leading patient acquisition software platform, and our partners at the Pueblo County and Denver Medical Societies, we launched the COVID Survival Webinar Series focused on helping practices survive the short term, launch telehealth and get their operations back to normal once the stay-at-home order is lifted.

My prediction: In six months we’ll look back on everything that has transpired and be proud. We’ll have learned a lot to share with our community, and be inspired by a grand awakening of the American spirit. Serving others is life’s greatest reward.