Featured in the May/June 2014 Colorado Medicine. 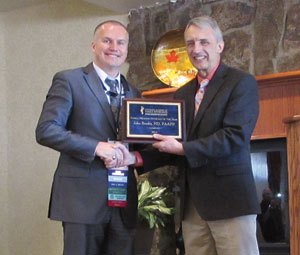 John Bender, MD, FAAFP, CEO of Miramont Family Medicine and current president of the Colorado Medical Society, has been named the 2014 Colorado Academy of Family Physicians (CAFP)Family Physician of the Year. In addition to managing a growing enterprise and a full panel of patients, Bender is a physician leader in advocating for reforms that support primary care and the patient-centered medical home.

Bender, receiving his medical degree from Creighton University in 1992, became a Flight Surgeon in the United States Navy. Bender’s service in the U.S. Navy lasted from 1988 to 2000 with multiple tours.

He then joined the U.S. Army and was an Army physician touring in Kosovo with NATO Allied Forces.

“Before I moved back, I was bouncing around for almost 20 years,” Bender said. “I had moved 17 times in 17 years with the Navy and Army.”

In 2002, Bender and his wife, Teresa, purchased a family medicine practice in Fort Collins, Colorado. Since then, Miramont Family Medicine has been growing all across the state of Colorado, including in rural and underserved areas.

When Bender and Teresa purchased the small practice, at that time consisting of about 1,000 patients, the office had one computer and one employee. During that same time, 34 primary care physicians had left the area and eight practices had gone bankrupt. Today, Miramont Family Medicine has seven locations and the enterprise sees over 30,000 patients with over a quarter coming from Medicaid, Colorado’s public health insurance program for those who earn less than 133 percent of the poverty line.

From 2001 to 2012, Miramont Family Medicine grew exponentially with revenue growing from $169,000 to $4.8 million a year. Bender and Teresa, also his practice administrator, accomplished this with a set of practice transformation techniques and quality improvements.

“Practices that fail often are the ones that have not effectively managed labor costs,” said Bender to Medical Economics in their cover story titled “Family Medicine’s Revival: Managing Escalating Costs and Reinventing Primary Care Delivery.”

“I cannot simply pay my staff less. If anything, I have to pay them more because we are in such a high-density of services and digitalization,” he continued. “What Miramont does differently is through Lean principles and leveraging information technology.”

“Becoming NCQA-recognized meant a lot but where it had the most impact was the workflow redesign process,” said Bender. “We put pedometers on our providers and staff in order to make our practice more efficient and require the least amount of steps.”

In 2011, the Colorado Academy of Family Physicians recognized Miramont Family Medicine as the patient-centered medical home of the year and in 2010 won the national HiMSS Nicholas E. Davies Award of Excellence for outstanding achievement in the implementation and value from health information technology.