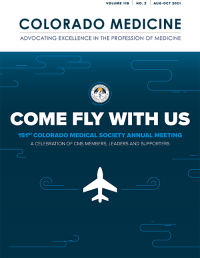 The CMS Education Foundation awarded more than $25,000 in rural medicine scholarships to medical students who come from rural areas and/or are committed to practicing medicine in rural areas. The Foundation also awarded $7,000 in Alfred Gilchrist student leader scholarships to medical students who have demonstrated outstanding leadership to CMS and/or other membership organizations in the House of Medicine.

Below are the awardees of the rural medicine scholarships, with named scholarships indicated where applicable.

Originally from Estes Park, Colo., and daughter to an emergency medicine physician and nurse practitioner, Amelia hopes to practice small-town medicine in rural Colorado. She worked as an EMT while an undergraduate at Colorado State University, and is currently a member of the Rural Track Program at CUSOM.

Hunter plans to pursue a career in general surgery in a rural area of Colorado, and advocate for equitable health care, education and awareness to serve the community. He is inspired by his father, who provided dental care to the communities around Elizabeth, Franktown and Kiowa, Colo.

Inspired by her roots growing up on the plains of eastern Colorado and her father’s battle with multiple sclerosis, Ashlyn will pursue a career in rural primary care. She is currently in the Rural Track Program at CUSOM and has committed to four years in rural Colorado following her training.

Though Marie grew up in the metropolitan Bay Area of California, she seeks a career in primary care in a rural area, having felt drawn to the deep sense of community she experienced as a white-water rafting guide in Idaho and an engineer in the coal bed methane fields in Trinidad, Colo.

Paulyna was deeply affected by the death of her brother and the resulting support and comfort her family received from her community in Wray, Colo. She has a master’s degree in clinical psychology and seeks to become a psychiatrist in a shortage area such as northeastern Colorado.

Tori grew up in the agricultural town of Fort Morgan, Colo., and witnessed numerous obstacles to accessing the health care system that meant many rural residents could not achieve optimal health. She desires to practice in a rural Colorado area and internationally.

Below are the inaugural awardees of the Alfred D. Gilchrist Student Leader Scholarship.

Pratibha has extensive experience in teaching, leadership, advocacy and clinical work that she applies to her medical education. She has two master’s degrees in business administration and health care administration. She will benefit from all of her training, relationships and life experiences in her future medical career.

Danielle’s first experience with the Colorado Medical Society was attending Medical Student Day at the Capitol, which led her to become RVU’s Policy and Advocacy Chair. Later she became a leader within the larger Medical Student Component of CMS and a member of the CMS Board of Directors. She plans to join a CMS committee and be involved in her specialty society during residency and beyond.

Leadership has been a core part of her medical education through four years of medical school and continues to be a passion and priority. Former CMS CEO Alfred Gilchrist, the namesake of the scholarship, served as a mentor to her in advocacy and lobbying and she, in turn, mentored other medical students. She helped organize to two Medical Student Days at the Capitol and the inaugural White Coat Wisdom event.

Alysa has been involved in the Colorado Medical Society and American Medical Association, and has mentored other students on paths to involvement. She hopes to continue educating herself about the issues affecting her community, mentoring students and using her voice to influence change. She also hopes to complete a Spanish-speaking medical elective to support her growth as a young physician and will continue her leadership roles in CMS and AMA.

Ross has been involved in organized medicine since his first year of medical school as part of the American Medical Association student section at the National Advocacy Conference. He has also served as community service and outreach chair of the RVU Chapter of the Colorado Medical Society, on the RVU Chapter’s board of directors and on the Colorado Academy of Family Physicians Board of Directors. He intends to stay in Colorado and practice family medicine.

Congratulations to all of these outstanding students.