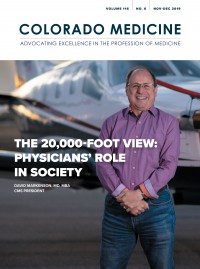 Bryan Campbell, FAAMSE, has been named Chief Executive Officer of the Colorado Medical Society, effective January 2020. A Nebraska native and graduate of the University of Nebraska – Omaha, he is returning home after two decades on the west and east coasts.

“I am honored to have been chosen to lead the Colorado Medical Society,” Campbell said. “Time and again, Colorado physicians, other health care leaders and elected officials have committed to innovative solutions to improve Colorado health care. I look forward to working with physicians and staff to achieve CMS’s mission and continue great strides for patients.”

Bryan moves to CMS from his most recent position as the CEO of the Duval County Medical Society (DCMS) in Jacksonville, Fla. DCMS is the oldest and largest county medical society in Florida, founded in 1853 and with nearly 2,000 members. In his time at DCMS, Bryan was recognized as one of Jacksonville’s 40 Under 40 and 40 Most Influential People in Healthcare, and was named the Chairman of the Jacksonville Mayor’s Council for Fitness and Wellness for consecutive terms. Bryan is currently the Secretary/Treasurer of the American Association of Medical Society Executives, and earned the “Fellow” designation in 2018 (FAAMSE).

“Bryan’s exemplary leadership demonstrated at DCMS and throughout his career, exceptional knowledge of advocacy and relationships with legislators, and deep understanding of the issues facing physicians and associations make him a fantastic choice to lead CMS into the future,” said CMS President David S. Markenson, MD, MBA, FAAP, FACEP, FCCM.

“CMS conducted a nationwide search for our next CEO,” Markenson said in his announcement letter. “The culmination of the search was a full day of interviews with four finalists. The interviews included a broad representation of the CMS leadership and membership including but not limited to the Board of Directors, past presidents, young physicians, medical students, residents, component society leadership and staff. The selection process and interviews reflected the priorities of CMS including public policy, communications and organizational excellence.”

Bryan spent 14 years as a broadcast television executive before moving into organized medicine in 2006. He has worked at television stations from Oregon to Florida, and was the senior producer for more than 200 hours of live television around Super Bowl 39 in Jacksonville in 2005. Outside of work, Bryan is active in a number of civic and public health organizations, most significantly Rotary, and is passionate about sports, board games, music and singing. He is married to Sarah Campbell, his high school sweetheart, and they have two children, Lauren (22) and Nathan (19). They also have one grandson, Lincoln (1).

Outgoing CMS CEO, Alfred Gilchrist, will retire in January 2020 following 15 years in this position and 20 years at the Texas Medical Association. CMS wishes Alfred well in his retirement.