Editorial: There is no medicine in medical marijuana
Wednesday, January 01, 2020 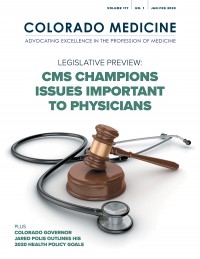 Marijuana (tetrahydrocannabinol or THC) as well as other “natural” cannabinoids such as CBD (cannabidiol) are not medicines but substances. Colorado was one of the first states to legalize marijuana in the form of “medical marijuana” (2000), followed inevitably with legalization of recreational marijuana (2012). The promise of social justice from decriminalization and increased tax income to the state and local municipalities for infrastructure support have either largely not been met or have been surpassed by increased health dangers, increased hospital emergency room visits, increased crime and increased threats to our youth.

Marijuana has been in use for thousands of years. THC plants were grown in backyards, dorms and between the rose bushes. Hemp has contained CBD for the history of the fiber industry. What has changed? Marijuana is no longer a cottage industry where typical “weed” contained 3.8 percent THC. Science has increased the natural potency of grown flowers to 20 percent and concentrates can reach nearly 100 percent. It is now a mega-industry; while there are regulations prohibiting marketing to youth, some buy into the belief that marijuana is safe because it is authorized by physicians to treat medical ailments.

There is no evidence that inhaled or ingested THC is safer or more effective than other health treatments except for small, evidence-based studies on HIV/AIDS or cancer-related wasting and cachexia. Recent large-population studies for chronic pain have, in fact, shown little to no evidence of superior effectiveness or lower risk but have demonstrated significant increases in cost to the health care system (1). Meanwhile, in states like Colorado, the medical “indications” are incorporated into statute by non-medical advocates and industry lobbyists. Perhaps the most alarming aspects are the rapid escalation of THC concentration especially in the “medical” market. To compound the risks, dose management is in the hands of individuals.

In terms of true medical safety and efficacy, there are THC and CBD FDA-approved medications: synthetic THC (dronabinol and nabilone) for HIV/AIDS and cancer wasting, and plant-based CBD (epidiolex) for rare childhood seizures. But even with safe, effective and true medications available, my pediatric neurology colleagues tell me that parents still want CBD rather than the safe, FDA-approved medication for their child’s epilepsy because it is more “natural.” Finally, Colorado surveys demonstrate that while marijuana use did not increase in children and teens after legalization, the perception that marijuana has risks has plummeted to half the national average (2).

CBD use has also now joined the potential harm-inducing substances in massive quantities with the passage of the recent farm bill that removed protections to the public. This scenario appears likely to play out as each state considers legalization. Like previous attempts to prohibit alcohol, constraining marijuana use is likely to be ineffective against societal pressure. But the medical community can and should continue to demand that evidence inform appropriate use of all substances of risk, including marijuana and CBD.

The Colorado Medical Society has removed any reference to “medical marijuana” from its current policies and refers to all cannabinoid products as requiring evidence and regulation for any health-related use. The profession has an obligation to oppose the use of the term “medical marijuana,” which is a legal and/or statutory term. It should continue to advocate for public health and safety regulations that require measured potency standards that are limited to less than 50 percent. FDA-like (or FDA) processes that utilize prospective studies with dosage, benefits and risks identified should guide any health-related claims.