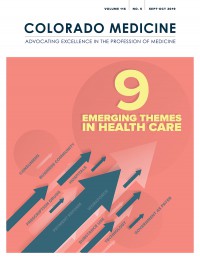 Paul Presken’s environmental scan, featured in this issue’s cover story, could not be more correct or instructional than to begin with the observation that health care costs have reached a tipping point.

As a Brookings Institution analysis of consumer spending quantified recently, total middle-class health care expenditures increased 24 percent from 2007 to 2014 while overall expenditures for necessities like food, housing and clothing actually decreased by more than 6 percent!

By taking money out of families’ disposable incomes, out of classrooms (half of Colorado schools operate on a four-day week for lack of funding while family premiums can eat 25 percent of a teacher’s salary), and out of corporate earnings, health care spending probably represents the most critical socio-economic tipping point of our time.

Presken also correctly calls out hospital costs. Although not the only issue in health care, economists across the United States seem to agree that hospital price increases enabled by consolidation present the central economic barrier to a more rational market. While excessive pricing for other services represents a problem, particularly in the profiteering world of pharmacy, hospital payments represent the largest percent of the medical expense ratio at 2.76 times Medicare in Colorado statewide (and over four times Medicare for our four largest health systems). These payments distort hospital incentives and externally distort market dynamics. As MedPAC economists outlined in their March 2019 report to Congress, excessive commercial payments simply allow hospitals to increase administrative costs and duplicate services, thereby aggravating their Medicare losses. Case in point: The acquisition of physician practices by hospitals for the explicit reason of increasing leverage with insurers so as to be able to increase prices even further. Economists call this a negative feedback loop. It needs to be disrupted.

Both because “health care is local” and because of Washington’s gridlock, states must take the lead in addressing such marketplace dysfunction. While several are doing so, Colorado seems poised to become the national leader. Gov. Jared Polis, by endorsing “a statewide model that essentially empowers the customers to have better negotiating leverage with the providers to negotiate better rates,” (see “Gov. Polis is looking to take innovative Summit County health insurance alliance model statewide” by John Ingold, Colorado Sun, Aug. 6, 2019), has facilitated just the sort of “involvement” by Colorado’s business community that Presken highlights. Now, assuming employers exercise the requisite courage and act on their fiduciary responsibility, health care marketplaces will become both more effective and efficient – instead of less and less so. In the end, if employers want to transform how care is provided, they must transform how they purchase it.

But employers cannot change the dynamics alone. They must partner with physicians – particularly independent physician groups and, because the majority of employee costs are directly or indirectly attributable to chronic disease, particularly with primary care physicians. Any effort at reform must respect the patient-physician relationship. And the two parties in all of health care with the most aligned interests in making that happen are employers and physicians. Both seek the best outcomes for patients at the most affordable cost.

Working together, preferably at the local or regional level but with an overall vision for a better health care system through the Colorado Medical Society, employers and physicians can take on pricing issues and address the three-headed utilization beast – underuse, overuse and misuse.

An excellent example of this is taking place in northern Colorado where the Northern Colorado IPA is working proactively with several employers on a number of projects, each led by a separate employer group. Using reporting from CIVHC, employers and physicians are collaboratively addressing low-value services, emergency department use, advance directives and referrals to over-priced outpatient sites. While reasonable hospital pricing is important, it is this sort of collaboration that can transform health care in Colorado over the long term.

The Colorado Business Group on Health is encouraged by the terrific work taking place in northern Colorado. And we are particularly excited to play the central role in the establishment of a statewide employer purchasing alliance that will seek to expand such collaborative relationships across the state. By working with physicians, both directly and through the Colorado Medical Society, we are committed to contributing to a more functional market that better serves our families and communities.

Robert Smith, MBA, is the executive director of the Colorado Business Group on Health. The Group is a purchaser-led, multi-stakeholder nonprofit coalition committed to collaboratively improving the health care value-proposition for all Coloradans and their communities.