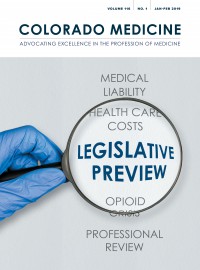 Featured in the January/February 2019 Colorado Medicine.

The American Medical Association honored Alfred Gilchrist, chief executive officer of the Colorado Medical Society, with the Medical Executive Lifetime Achievement Award at the AMA’s Interim Meeting in November. This award honors a medical association executive who
has contributed substantially to the goals and ideals of the medical profession. Gilchrist has served as CMS CEO since November 2004.

“I am deeply touched and humbled to receive this Lifetime Achievement Award,” Gilchrist told the audience at the AMA Interim Meeting in his unmistakable South Carolina drawl. “It is particularly meaningful to me understanding so well as I do that the AMA is the largest and most influential organization representing physicians in America today. It is also meaningful because AMA’s goals of addressing physician wellbeing and access to care for Americans align with those of the Colorado Medical Society.”

“We understand what this award represents,” Gilchrist continued, also characteristically diverting credit from himself to those he serves. “It represents thousands of volunteer physicians hours. Doctors showing up time and again with the goal of making care better for patients and the communities they serve. It represents compassionate and bold physician leadership past and present. It represents the hard work, dedication and long hours of your staff. For when these three things come together through a vision, a plan, in execution and a little luck, great things can happen. And great things have happened during my career to the point where I can say from the bottom of my heart that I could not have had a more meaningful and rewarding career than going to work and fighting every day for your honorable profession.”

Gilchrist earns the Medical Executive Lifetime Achievement Award for his 39 years of executive leadership in Colorado and Texas – a period in which he has guided, grown and advocated for the medical profession daily.

“A brilliant leader, strategist, team builder, and advocate for patients and medicine, Alfred Gilchrist has led CMS through an unprecedented period of advocacy and growth,” said AMA President Barbara L. McAneny, MD. “He succeeded in advocating for Medicaid expansion and stabilizing medical liability climates. And his tireless work to prevent insurance mergers that would have harmed patients and physicians alike was instrumental in their defeat.”

During his years of leadership at the CMS, Gilchrist has used his ability to form strong relationships and partnerships to secure numerous legislative victories in Colorado, while advancing the whole organization. In addition to his critical work on Medicaid expansion and insurance mergers, Gilchrist also designed the nation’s first standardized managed care contract law, requiring oversight of payer profiling and rating of physicians, and the first body of law in the country requiring oversight of payer profiling and rating of physician performance. He also played a critical role in securing grants and funding to improve care and ensure public health, including $1.5 million for pandemic flu preparedness.

Prior to joining CMS, Alfred was the lead lobbyist for the 40,000-member Texas Medical Association where he coordinated all state and federal legislative advocacy. He staffed and advised TMA policy bodies on setting policy positions and strategy on approximately 900 pieces of legislation each legislative session for 20 years.

"AMA’s gracious acknowledgment of Alfred’s skill, steadfast devotion and professionalism might be more accurately described as a lifetime of achievements,” Ross says. “Over the course of several decades Alfred was the creator, motivator and retailer of almost countless policy reforms, political fixes and organizational innovations, any one of which could be considered a standalone lifetime achievement in the tumultuous world of physician advocacy; and many were national firsts. Since we first started our collaboration in 1979, I have never known anyone with a stronger heart, steadfast will and moral purpose.”

Gilchrist announced at the 2018 CMS Annual Meeting that he will retire in early 2020. To honor his many contributions to the organization and the development of its physician leaders, CMS has formed and is actively fundraising for the Alfred D. Gilchrist Student Leader Scholarship. Though a steering committee that includes Gilchrist will determine the ultimate focus and criteria of the scholarship, the vision is to recognize excellent medical student leaders with a passion for medical advocacy and policy to further the profession, medicine and the health of patients.

An outpouring of support for Gilchrist and the scholarship has meant CMS is already well on its way to raising the minimum of $100,000 that will allow for an annual award, but contributions will continue to be accepted throughout the year and on an ongoing basis. See the highlight box on page 13 for more information on making a contribution.