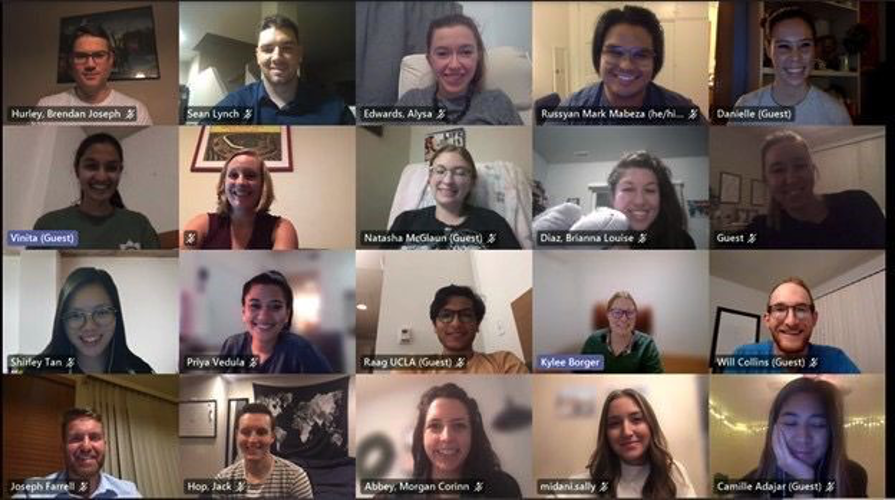 Group photo from Region 1 Business Meeting prior to MSS

The Delegates and Alternate Delegates from CU, Kseniya Anishchenko and Jack Hop, and RVU,  Joe Farrell and Sean Lynch, along with Policy and Advocacy Chair Alysa Edwards, met on the Monday night before the MSS meeting to establish our positions on resolutions as a state delegation. Next, we met  with the rest of the Western Region (Region 1) on Thursday evening to discuss resolutions and take positions as a region prior to the beginning of the MSS meeting on Friday, Nov. 6.

During the MSS meeting, which took place from Nov. 6-8, the MSS considered over 150 items and actively discussed 21 of them. Our delegation contributed to the resolutions in various ways. Kseniya Anishckenko helped author resolutions including one in regards to improved personal protective equipment design and fitting. Joe Farrell, Sean Lynch, and Jack Hop evaluated, summarized, and debated resolutions as part of Region 1’s resolution review and feedback process. Additionally, Jack secondarily reviewed resolutions as part of the House Coordination Committee, which is responsible for assessing resolution novelty. Altogether, eight resolutions were immediately forwarded to the AMA House of Delegates meeting.

CU and RVU delegates participated in Colorado Delegation meetings to discuss outstanding issues, resolution specific commentaries, and general discussion about upcoming amendments. In particular, resolutions surrounding racism in medicine and our own Alyssa Edward’s coauthored resolution on police reform were discussed heavily. Both garnered a great deal of constructive debate in anticipation of amendments and discussion on the HOD floor.

In regards to medical education, the AMA will be advocating for the permanent cancellation of STEP 2 Clinical Skills exam for medical students, along with free retakes for STEP 1 for the students whose exams were cancelled and rescheduled during COVID-19. Additionally, the AMA will be working to protect residents in the event of hospital closures moving forward.

CU: The CU CMS/AMA chapter will be holding elections for new CMS/AMA leadership over the final weeks of November. We are excited to have a new group of first-year medical students to lead us into next year.

RVU: The RVU CMS/AMA chapter will be holding elections for new CMS/AMA board leadership in the final weeks of November. The new leadership transition will take place over December/January, with the new leadership taking full responsibility by the end of January. Additionally, the chapter will be pursuing additional student body involvement through the CMS by designing a virtual White Coat Wisdom event in conjunction with CU.