Featured in the November/December 2015 Colorado Medicine.

Mark Sheehan, MD, and Daniel Smith, MD, have worked for 16 years in the country of Cambodia providing medical care for the poor and medical education to native health care providers. Deeply religious Christian men, they humbly decline the title “Physician Heroes,” seeing their journey as a calling that has changed their own lives in monumental ways. 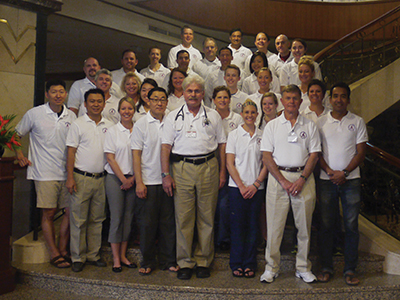 Sheehan, a cardiologist with South Denver Cardiology Associates, and Smith, a retired cardiothoracic surgeon from Denver, are co-founders of Christian Medical Ministry to Cambodia/Jeremiah’s Hope, a nondenominational, international ministry that brings a half-dozen American health care teams to Cambodia each year, supports a permanent Cambodian clinic staff of five physicians and 16 nurses, and has provided education to more than 300 native medical students.

In the mid-1990s, despite being at the top of their game professionally, they both went through periods of “being broken,” as Sheehan describes it, “emotionally, spiritually, psychologically – and had to be put back together again.” It was through this process that they became friends; they started a Bible study that still meets to this day. It was also through this group that they were invited by Rev. Setan Lee and Jim Groen of Global Connection International to visit Phnom Penh, Cambodia’s capitol, for a nine-day trip to Cambodia in June 2000 to evaluate the medical conditions there.

What they found was “atrocious and inadequate,” Smith said. To provide historical context to the great need in the country, which is about the size of Colorado, a civil war broke out in the 1970s that put communist insurgents Khmer Rouge in power. Their almost four-year reign of terror is commonly known as the “killing fields,” during which 30 percent of the seven million Cambodians were killed. The most highly educated were hunted and executed – intellectuals; military officers; medical professionals; and religious, civic and political leaders. When the killing fields ended, there were only 35 physicians left in the entire country and roughly half of those then fled to other countries, Sheehan said. 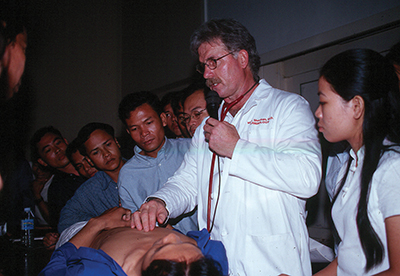 The physicians weren’t sure what exactly they were going to do in the country until the last day of the trip when they visited what was called the soldier’s hospital. It was the worst facility they had ever seen. But while they were there, children kept coming up to them to touch their hands and after a half-hour of walking around, both of them had two children holding each of their hands. They saw what they called “God’s goodness” in those children, and realized that what they were going to do was not going to be just a medical or humanitarian effort. It would also be a ministry to the medical teams who would travel with them.

They officially formed Jeremiah’s Hope in 2004. Though they have worked in several facilities over the years, they currently operate a clinic and surgery center adjacent to the Sihanouk Hospital Center of Hope. Over the years more than 520 team members have seen more than 2,250 consults and performed 650 operative procedures plus 150 cardiac surgical procedures.

There have been four patients whose conditions were too severe to care for them in Cambodia and they have been flown to the United States for treatment. One in particular stands out in Sheehan’s mind as the most memorable. It was 2001 when they received a call from Kendrick Kahler, MD, an American family physician who worked with them at the beginning of their ministry. He told them about a 13-year-old girl with tricuspid valve endocarditis, an infection in her heart valve. 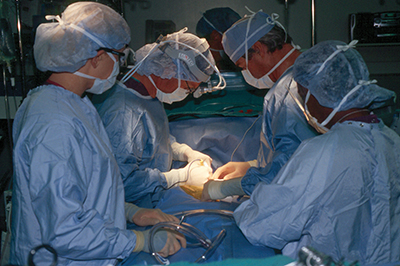 Daniel Smith, MD, operates on the 13-year-old patient with tricuspid valve endocarditis after transporting her from Cambodia to Porter Hospital in Denver.

“She was seizing and dying in Cambodia so we talked to the administration at Porter Hospital [in Denver] and they agreed to provide the necessary care if we could fly this young girl over,” Sheehan said. “We had already talked to all of the physicians: the infectious disease doctors, surgeons, anesthesiologists, neurologists, cardiologists, and everyone agreed to do this for free. We brought her over, had her evaluated by all these specialists, and Dr. Smith did the surgery to close the hole in her heart and repair the valve. She subsequently is back in Cambodia and at 27 years of age is doing great.”

Smith said that while it’s frustrating to see severe disease in patients who could have benefited from early intervention, going to a third-world country to practice medicine is encouraging and enlightening. “It helps you get back to why you went into medicine: to take care of people.”

When the clinic opened, all of the care was free but as Cambodia’s economy has improved, Jeremiah’s Hope and the permanent clinic staff began charging a fee based on the patient’s ability to pay. They’re now raising about 50 percent of their operational costs and aim for full self-sufficiency in five to 10 years. “The long-term goal of any mission is to make them self-sufficient,” Sheehan said. “You can’t go over there forever and do this. But we’ve given them support and things are moving in the right direction.”

Until then, they will continue to accompany and sponsor medical teams to travel to Cambodia to assist with health care and the education of the next generation of medical professionals. Sheehan said often that the American physicians and nurses who go to Cambodia think they’re going to do great things but realize when they return that the great things have happened to them. “They come back thankful for what they have in the United States and thankful they can contribute what they can.”

“The problems in Cambodia are so big that no one can write a check to make it right,” he added. “You can only go do your best. It really changes the hearts of the team members. The people who go over there are touched and have been changed.”

Find out more about Christian Medical Ministry to Cambodia/Jeremiah’s Hope on their website at www.cmmcjh.com

Editor’s note: The Colorado Medical Society recognizes the prevalence of burnout among physicians. To help our members reflect on the difference they’re making in the lives of their patients and community, and to recognize extraordinary actions, Colorado Medicine presents the Physician Heroes series. We will profile as many different members as we can who have gone above and beyond in the profession to help their colleagues or community. We hope you’ll see your own values reflected in these stories and be reminded of the joy of medicine.

Nominate yourself or a member colleague by contacting Dean Holzkamp at dean_holzkamp@cms.org or Kate Alfano at kate_alfano@cms.org.