Featured in the May/June 2014 Colorado Medicine.

CMS member John Ogle, MD, MPH, is an emergency physician in Longmont and a colonel in the United States Air Force. Over his 33 years in the military he has devised his own “anti-burnout” strategy; he has deployed on humanitarian and combat missions to seven continents with military and civilian relief organizations. He travels voluntarily, going where he feels he can make a difference. “I’m drawn to unique places where I’m going to be doing something interesting and meaningful with the skill set I have. Like many ER docs, I have a touch of ADHD, which craves variety.” 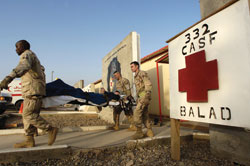 Airmen of the 332nd Expeditionary Medical Group carry a patient aboard a waiting Air Force C-17 for a medical evacuation flight from Balad Air Base in Iraq to Landstuhl Regional Medical Center in Germany for further treatment on Feb. 27, 2007. Credit: U.S. Air Force photo by Airman First Class Nathan Doza.

Ogle currently serves as the commander of the 153rd Medical Group, based out of Cheyenne, Wyo. The group is part of the 153rd Airlift Wing of about 1,000 service men and women age 18-60 from around the country. Ogle’s medical group comprises 67 health care professionals including dentists, optometrists, surgeons and critical care doctors. “We’ve got a mishmash of specialties, super-talented, devoted, patriotic people,” Ogle said. “Everyone’s involved for slightly different reasons but we all focus on delivering world-class care in the world’s most hostile environments. Our team delivers high-tech medicine around the globe. Part-time military service is a great antidote against professional fatigue for many doctors.”

An admitted shutterbug, Ogle tells his “war stories” through pictures. He flipped through images of a field hospital in New Orleans after Hurricane Katrina, refugee medical facilities in Tunisia, and the airborne ICU in the back of a C-17 aircraft. John Ogle, MD, MPH, at Bagram Airbase in 2009, when he was deployed with the 455th Air Expeditionary Wing, which is part of NATO International Security Forces.

He came across a series of photos from the 332nd Air Force Theater Hospital at Balad Air Base in Iraq where he deployed in 2007. It was during “the surge,” the busiest trauma operation of the war, and he worked in the combat hospital. “Basically a MASH unit,” he said, the hospital comprised a massive series of interconnected tents. There were four generator-driven air conditioners devoted to the radiology wing to cool equipment and provide some relief through the canvas against the 120-degree desert heat. They were north of Baghdad, about 80 miles outside of the Green Zone.

“We were shelled constantly and had to place sandbags around the tents for shrapnel protection. After just three weeks I had this little award that read, ‘Survived 100 mortar attacks.’” Most days were tough, but the staff rarely complained because just a few moments with the severely wounded American and Iraqi casualties put it all in perspective and reminded everyone why they choose to be doctors, Ogle said. John Ogle, MD, MPH, in front of the medical tent at Incirlik Airbase in Turkey during Operation Northern Watch in 1999.

“We were sweaty but had it easy compared to those brave folks. Army, Navy and Air Force doctors of every specialty were humbled to treat some of the worst casualties of the war. I am very proud that during the Iraq war, 98 percent of the wounded who reached Balad survived – a statistic unmatched in any previous conflict.”

He told another story from Balad. “I’m placing a subclavian Swan-Ganz catheter and threading a wire through the introducer aiming for the right ventricle. It was the critical few seconds, and I was nervous that I’d screw up the delicate procedure. Thankfully the wire passed into the heart easily and we were all focusing on the arrhythmia that I was inducing to make sure the catheter would be in the right place. 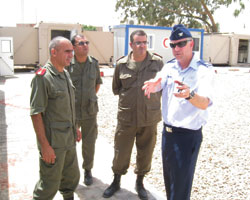 John Ogle, MD, MPH, at the Libyan Refugee Camp in in Southern Tunisia in August 2013.

“Just at that moment, the daily mortars decided to rain down. The power goes out everywhere. Even the backup power goes out. What are the odds for this poor patient? The nurse and I were left standing in the dark in sterile garb, hands frozen in position trying to devise the next move since the catheter was not yet on the wire. Everyone else in the ICU tent was on the floor, attack in progress. Luckily guys came out with flashlights within seconds – though it seemed like hours – I withdrew the wire, aborted the procedure and stopped the bleeding. The power came back on, I took a big breath, opened a new kit and re-accomplished the pulmonary artery catheterization. The patient survived transfer to Germany eight hours later.” Ogle paused on one photo from a deployment in Antarctica in 1999. Deployed at the same time was a dentist from Boulder who was hiking across the Ross Ice Shelf when he sat down abruptly with pallor and nausea. A nurse recognized signs of a heart attack and ran across the frozen ocean to trigger the alarms. A medical team picked him up in a track vehicle and they called Ogle to help resuscitate him. The patient deteriorated to full cardiac arrest but one shock reversed his ventricular fibrillation. Things looked bad, but Ogle was able to temporarily restore coronary circulation with thrombolytics.

“I’m on the ice shelf. There are no cardiologists on the entire continent, and no paved roads within 3,000 miles. What are we going to do?”

Ogle made the call to fly him out on a dedicated, ski-equipped LC-130 as a critical care patient to the nearest chest pain center – in Christchurch, New Zealand, a 10-hour one-way trip – for a stent. 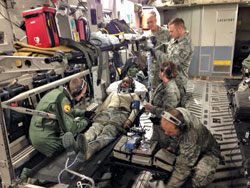 Airborne over Colorado in a C-17 practicing in-flight ICU operations in January 2014.

“Here we were with an unstable heart patient who was also a friend and professional colleague. We all felt helpless, but we did what we could with the tools available and luckily there was an excellent outcome.” Ogle and the patient later published a joint account in a medical journal of this first-ever full Antarctic cardiac resuscitation. Though this is obviously an unsustainable standard, that successful mission really made an impression on him early in his career. “With resources and technology, it is amazing how much modern medicine can do for somebody.”

Natural and manmade disasters are challenging but the rewards are immense. “Whether civilian or military, planning for a global medical response forces physicians to think outside the box, gaining comfort in chaos. You may not have your favorite drawer, be with your favorite nurse, or be able to park in your favorite parking space, but you might be surprised how well you’ll function away from your comfort zone. It is easy to rally a team when the clear, common goal is optimal patient outcome. I believe global medical service enriches all physicians because it helps us develop an adaptability and team skills. Together we reap incredible and intangible rewards by delivering familiar service in unfamiliar environments – burnout unlikely!”

Editor’s note: There are several warning signs of professional burnout, including having feelings of being rundown or drained of physical or emotional energy, feeling misunderstood or unappreciated by your coworkers, feeling that you’re under too much pressure to succeed, feeling frustrated by organizational politics or bureaucracy, or feeling that there is more work than you practically have the ability to do.

The Colorado Medical Society recognizes the prevalence of burnout among physicians, particularly in this time of great change in health care. To help our members reflect on the meaningful difference they’re making in the lives of their patients and community and to recognize extraordinary actions, Colorado Medicine launched the Physician Heroes series. We will profile as many different members as we can who have gone above and beyond in the profession to help his or her colleagues or community. We hope you’ll see your own values reflected in these stories and be reminded of the joy of medicine.

Members are invited to nominate themselves or a colleague by contacting Dean Holzkamp at dean_holzkamp@cms.org or 303-748-6113.