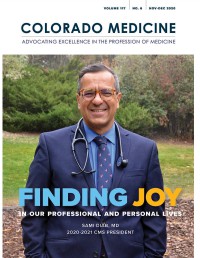 Advocacy efforts to ensure the confidentiality and integrity of the physician peer assistance program have intensified over the past few months. Proposed changes by the Department of Regulatory Agencies (DORA) threaten protections that for years have helped physicians and physician assistants get the mental and behavioral health care they need without fear of discovery by the Colorado Medical Board (CMB). Countless physicians have joined calls by Colorado Medical Society, the House of Medicine, COPIC, Colorado Hospital Association and others to fix these proposed changes.

Earlier this year, the Department of Regulatory Agencies (DORA) announced its intention to award the state peer assistance contract to Peer Assistance Services (PAS) rather than the Colorado Physician Health Program (CPHP) that has expertly run the contract for more than three decades. The award is being appealed. CMS has opposed critical changes in this process that were made by DORA that will require all physicians accessing the program, both mandated and voluntary participants, to sign a waiver allowing PAS to share their medical information with the CMB.

Until now, physicians who voluntarily seek services are not reported to the medical board as long as they adhere to treatment plans. “Prevention and early treatment of physician mental/behavioral health issues are essential, and we worry that by awarding this contract in its current form there will be a chilling effect resulting in physicians ignoring or minimizing their response to difficult and traumatic events,” wrote then-CMS President David Markenson, MD, MBA, in a letter to Gov. Jared Polis in July. Concerns were also raised about the longstanding, peer-to-peer nature of the services to be provided because PAS does not have physicians on staff. What’s more, DORA made these changes and selected a final vendor without consulting CMB members who by law are required to choose the program provider. During the Aug. 20, 2020, CMB public meeting, members of the board were effectively gagged by DORA and Colorado Attorney General staff from questioning or even discussing the issue under threat of lawsuits.

These changes have prompted a swift, unified and negative response from across the physician and health care community. In several letters to state leaders, the Colorado Medical Society and others expressed extreme concern about harmful consequences to patient safety, physician well-being and the inability to maintain an adequate physician workforce in Colorado should the decision be upheld.

There is substantial evidence that lack of access to confidential care increases physician stress, burnout and depression, and is a leading cause of physicians leaving practice before retirement age. Research also shows that without confidentiality (safe haven) protections, many physicians will not voluntarily seek services because of concerns about repercussions to their medical licensure. There are clearly circumstances in which a physician peer assistance program must disclose a participant’s identity and involvement to the CMB, which CMS supports.

On Oct. 7, CMS, COPIC, Colorado Hospital Association and the Colorado Association of Health Plans wrote to DORA requesting an emergency meeting of the Colorado Medical Board to formalize needed confidentiality protections, especially in light of continuity of care issues that the approximately 500 physicians, physician assistants and anesthesiology assistants who are currently being treated by CPHP now face given the looming switch to PAS. About one week later CPHP was notified that their contract was being extended until Jan. 31, 2021, and their appeal was being transferred to the Office of Administrative Courts. At press time no official response from DORA to the Oct. 7 letter has been received, but the board meets on Nov. 19 for their regularly scheduled quarterly meeting.

The increasing intensity of advocacy efforts reflects the importance of this issue to the physician community. CMS and partners have methodically and persistently advocated to DORA, the governor, legislative leaders and members of the CMB that these changes must be averted. The message is simple. This uncertainty must end. Colorado must ensure the confidentiality of physician mental health treatment and not discourage voluntary self-referral by the implied threat to one’s license/job and the loss of professional esteem. The current focus continues to be on reversing these proposed regulatory changes through DORA, but CMS and partners are resolved and ready to fix this legislatively during the upcoming session if necessary.