President’s letter: In the center of the storm
Wednesday, July 01, 2015

Featured in the July/August 2015 Colorado Medicine. 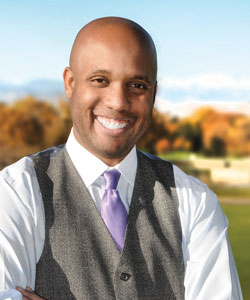 One would need to be near comatose to not have noticed that the recent Colorado weather appears determined to demote the majority of our “weather forecasters” (a dicey job in our state at the best of times) to “weather fortune tellers” (and inaccurate ones, at that). We have experienced thunderstorms and wall clouds brewing from clear skies so quickly that the reporting on social media is more accurate than the reporting on network news; pelting hail so thick that it looks like snow; flash floods running down city streets and drowning cars and basements; and even multiple urban tornadoes, including a very recent one that touched down about 40 feet from my car, about six blocks from my Denver address while I was driving my children home from the swimming pool.

“Daddy, look, a tornado!” was not exactly the sort of experiential lesson in the natural sciences that I was hoping to give my kids that day. To put it simply: things have been a bit crazy, with a lot of time spent in hallways, bathrooms and basements. Most people I know are ready for a respite.

Frustratingly, Colorado’s health care climate looks eerily similar to the actual climate for many physicians. A sudden move from the bright sun of SGR repeal one day pivots to a storm of narrowing networks the next, driving sheets of new coverage products, each with its own rules and frustrations. We’ve experienced the looming flood of ICD-10 transition, along with the whipping, swirling winds that push our practices from payers to hospitals and regulatory bodies, threatening to uproot us and to land us who-knows-where.

Given all of this, I can understand the instinct to head for the basement and wait it out, hoping that water doesn’t rise in the window wells. But, much like a real storm, these transitions in our practice environment will not necessarily pass peacefully leaving our shelter unscathed – unless that shelter is well built. Thankfully the Colorado Medical Society is working hard to shore up our walls.

Having successfully advocated for an interim study on the overall insurance marketplace (including narrowing networks), we wasted no time moving directly into in-depth study and advocacy on this remarkably important issue. As physicians and payers sit down together at the table working to find solutions for consumers, we are ensuring that such a conversation will be productive for both physicians and patients.

Our staff has also been working at various levels in regulatory and judicial venues to educate those who implement and interpret the law, clarifying laws and rules that can either support our practices or drown them. As always, we continue to achieve great success in these arenas.

COMPAC, our affiliated Political Action Committee, has already begun vetting candidates and giving endorsements for the upcoming election cycle, including endorsing our very own Steve Sherick, MD, an emergency medicine physician, former CMS board member and tireless advocate for Colorado’s doctors and patients.

Perhaps most important, CMS is going through a deep dive into a governance reform process and communications audit, both of which promise to create the medical society framework of the 21st century: expanding opportunities for member involvement, allowing us to move at the speed of the Internet, and democratizing the organization in a way not yet achieved by any other medical society in the country.

We may not be able to keep the storms from coming or from showing up so suddenly but we can ensure that no matter how strong the winds, our house will still be standing when the wind stops blowing.

Until next time. Stay safe out there.