State CMO warns of youth vaping in Colorado and its connection to other risky behaviors
Monday, March 25, 2019 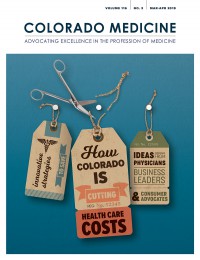 Featured in the March/April 2019 Colorado Medicine.

A letter by Tista S. Ghosh, MD, MPH, interim chief medical officer of the Colorado Department of Public Health and Environment, was recently published in the New England Journal of Medicine. In the letter, “Youth Vaping and Associated Risk Behaviors — A Snapshot of Colorado,” also authored by CDPHE colleagues Rickey Tolliver, MPH, Alison Reidmohr and Michelle Lynch, Ghosh urged health care providers to screen youth specifically for vaping, along with tobacco, as many teens may not associate vaping with tobacco.

She wrote that Colorado has the “dubious distinction of leading the nation in the use of nicotine-containing vapor products (electronic cigarettes), or vaping, among young people under the age of 18 years.”

According to the most recent national Youth Risk Behavior Survey, one in four high school students in Colorado reported vaping, a rate twice the national average. This makes Colorado No. 1 in the nation for youth vaping among the 37 states surveyed. According to the National Academies of Science, Engineering, and Medicine, there is substantial evidence that youth who vape are likely to later smoke cigarettes. There is also strong evidence that nicotine, which is found in most popular vape products, is harmful to the developing brain.

In her letter, Ghosh describes associations between vaping and other risky behaviors in youth, based on data from the Healthy Kids Colorado Survey of more than 40,000 high school students across the state. Analyses of that survey data revealed that youth who vape have a significantly higher likelihood of using prescription pain medicines that are not prescribed to them, binge drinking, using marijuana, and engaging in sexual activity. While these associations are not causal, they offer the opportunity to turn a vaping counseling session into one that involves screening and discussion related to substance abuse, pregnancy and HIV prevention.

The Colorado QuitLine has made free coaching available for children as young as 12 who are attempting to quit any nicotine product.