Under the Golden Dome: A report on the Colorado Option and CMS’s other legislative priorities
Tuesday, June 01, 2021 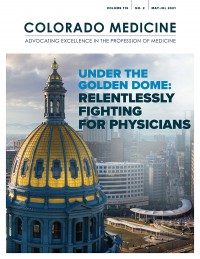 The COVID-19 pandemic wreaked havoc on the legislative session initially, but after a month-long recess in January and February, the Colorado General Assembly has conducted business mostly as usual, save for hybrid arrangements and testimony options to encourage public participation from afar.

With the 120-day session nearly over, health care issues have continued to be a dominant theme, with bills on topics ranging from the public option to public health responses, from prescription drug costs to use of ketamine in law enforcement situations, and from credentialing administrative hassles to alternatives to opioids. The Colorado Medical Society has been actively engaged in myriad issues on behalf of physicians and the patients they serve.

Here are a handful of particularly interesting bills that align with CMS’s legislative priorities:

CMS has been working tirelessly to represent members’ interests on HB21-1232 Standardized Health Benefit Plan Colorado Option. CMS strongly opposed the early versions of the bill, which included mandatory physician participation and rate setting. Following months of good-faith negotiations with bill sponsors, CMS successfully secured an amendment eliminating mandatory participation by removing all enforcement, fines and reporting. The success was due in large part to the hundreds of physicians who testified, wrote and called their legislators. CMS remains fully engaged and will closely monitor this bill through the final stages of the legislative process and subsequent rulemakings.

Current status as of publication: Passed the House and Senate; awaiting action in the House

Proponents of HB21-1184 PA Collaboration and Reimbursement cited access issues in underserved and rural communities as justification for this bill, which would have allowed independent practice by physician assistants. CMS successfully killed the bill, highlighting training differences between physicians and PAs and the valuable role PAs play in their current team-oriented positions.

SB21-061 Claims for Economic Damages Claimed by Minors, SB21-073 Statute of Limitations Sexual Assault, and HB21-1188 Additional Liability Under Respondeat Superior all seek to increase the liability exposure physicians and employers may face.

A collaborative effort by CMS, the Colorado Medical Group Management Association, and Colorado Health Plan Association, SB21-126 seeks to streamline the credentialing process for physicians, setting 60-day timelines and requiring communications between the plans and applicants throughout the process. The bill has widespread support and is the result of two years of negotiations.

Current status as of publication: Passed the Senate and the House and is awaiting the governor's signature

Protections and training for public health officials and employees

HB21-1107 Protections for Public Health Workers and HB21-1115 Board of Health Member Requirements are both a result of the COVID-19 pandemic. HB21-1115 seeks to require annual training for health board members, while HB21-1107 prohibits the sharing of public health workers’ personal information, similar to law enforcement officials.

Current status as of publication: HB21-1107 was signed by the governor; HB21-1115 passed the
legislature and is awaiting the governor's signature

Currently, the PDMP is a tool to prevent substance use disorders in patients. Proponents of HB21-1012 seek to include all prescription drugs in the PDMP. COL is concerned that this will dilute their program’s effectiveness and potentially increase the cost of administration.

Current status as of publication: Passed the House and the Senate with amendments; awaiting the governor's signature

HB21-1058 Promoting Social Distancing in the Marijuana Industry would allow physicians to recommend medical marijuana via telehealth. CMS has serious concerns about the safety of this proposal and the CMS Board adopted new policy, partly in response to this bill, regarding medical marijuana.

Current status as of publication: Killed by House Finance Committee

As of publication, COL has taken positions on 37 bills – all of which were identified as priorities through member input. You can follow the legislative session and work of COL by visiting the CMS bill tracker at www.cms.org/advocacy/bill-tracker. Watch for a complete analysis of the first regular session of the 73rd General Assembly in the next issue of Colorado Medicine.

An update on peer assistance

Two years of advocacy work to ensure confidentiality of peer assistance counseling for Colorado physicians came to a head at the May 20, 2021, meeting of the Colorado Medical Board when a new policy was approved. This issue has been a critical advocacy priority for Colorado Medical Society this year and the new policy provides important wellbeing and patient safety protections for physicians, physician assistants and medical students.

The new policy, 10-28 Confidential Assessment and Monitoring of Voluntary Treatment through the Designated Peer Health Provider, delivers important safeguards for voluntary participants who comply with treatment plans and have not compromised patient safety or caused patient harm, requiring confidential assessment and monitoring by the peer health provider.

Thank you to the physicians and medical students who have engaged in countless ways to convey the importance of this issue on their profession and ability to serve patients. CMS has helped lead the charge to protect confidential counseling services, collecting more than 3,700 petition signatures, testifying at public stakeholder meetings, organizing letter-writing campaigns, and pursuing legislative solutions should the board process fail.